END_OF_DOCUMENT_TOKEN_TO_BE_REPLACED

The fifth edition of one of the most influential events for the European robotics community took place last week from March 12-14 in Rovereto, Italy. As always, the 3-day program was jam-packed with dynamic workshops, seminars and talks, making it possible for robotics stakeholders from the whole of Europe to discuss the future of robotics research and industry, find new potential business applications and expand their professional network.

END_OF_DOCUMENT_TOKEN_TO_BE_REPLACED

This week, from March 10-11, over 2000 people from a variety of sectors involved in research, innovation and science gathered to take part in the 2nd Innovation Convention. The event, held this year in Brussels, is a key initiative of the Innovation Union, which aims to make Europe a more innovation-friendly environment – an idea that lies at the core of the European Union’s 2020 strategy.

END_OF_DOCUMENT_TOKEN_TO_BE_REPLACED

From November 6–8, nearly 5000 of Europe’s top researchers, engineers, industry representatives, politicians, journalists, entrepreneurs, and students gathered in Vilnius, Lithuania to share insight and future visions for the future of ICT in Europe. The global event also provided  an inspiring setting for the discussion of European ICT policy as well as networking opportunities for business, research, and innovation groups.
END_OF_DOCUMENT_TOKEN_TO_BE_REPLACED

The European Commission has recently agreed to launch a Public Private Partnership in Robotics (PPP) between academia and industry for 2013.

END_OF_DOCUMENT_TOKEN_TO_BE_REPLACED

An introduction to one of the FET Flagships

The video above was presented by the Robot Companion for Citizens Flagship Initiative at a conference in Warsaw at the end of November. Robot Companions for Citizens is currently one of 6 research initiatives in the running to receive 1 billion euros funding from the European Commission over the next 10 years.
END_OF_DOCUMENT_TOKEN_TO_BE_REPLACED The 6 FET Flagships showed off their stuff  at the midterm conference, involving about 250 European scientists and policy makers, who assessed the progress made by each of the flagships, reevaluating their goals and the possible impacts they will have.
END_OF_DOCUMENT_TOKEN_TO_BE_REPLACED 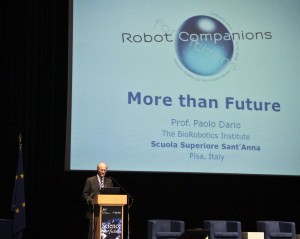 FET11 (European Future Technologies Conference Exhibition) was the second installment of a new forum dedicated to new research in information and communication technologies (ICT).  The conference, held May 4-6, 2011 in Budapest, Hungary, featured the launching of Robot Companions for Citizens as one of  6 Pilot Actions that will now be funded until May of 2012.
END_OF_DOCUMENT_TOKEN_TO_BE_REPLACED